I chose this race because it was fairly local and quite small. I read a few reviews of it on the DB max pages and thought it looked challenging! I did Wimbleball a couple of years ago so thought it would be a good race for me.

We travelled up on Friday after school, and pitched the tent at the race venue. The campsite was nice enough but we were in the furthest field from the toilets and we had to use a fob to get in, which wasn’t ideal with the kids, as they had to be taken to the toilet any time they wanted to go. The facilities were good with very hot water! When we had eaten dinner I went to register and received my race number, swim hat, t-shirt, a DB max buff etc. We then went to the park and stayed as long as we could stand getting eaten alive by midges! The race was on Saturday so I got back and prepared all my bottles and food for the morning, then tried to get some sleep! On the campsite it was quiet except for the huge amounts of birds that seemed to wake me up every hour, either paddling in the lake, or calling to each other! But I never sleep well before a race anyway.

Pitched up next to the lake. 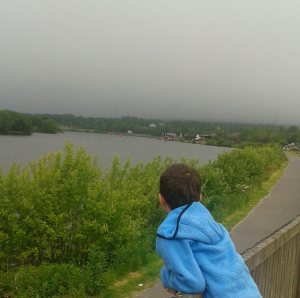 Devon, watching the swimmers in the mist!

There was one wave of swimmers at 7am, so I was up at 5am to eat breakfast and then hung around waiting for the start, waiting for the start is always nerve wracking, and I was on my own so no chatting to distract me. I sat in the cafe and tried to keep calm. After the race briefing we got in the water (apparently it was 18 degrees) It did feel warm and there was no problem getting acclimatised. There were only about 200 athletes entered so a nice small swim start. I looked around and realised that I was at the front, but this was ok I was feeling happy about swimming after the club time trial on Monday. I put a bit more effort in on the swim than usual, as I was trying to push a bit harder. I managed to pick up a draft at times but the field was so small that it wasn’t that easy to stay with someone. The swim was 2 laps, and when I exited the water I had a cheer from Nadine, then as I exited the second time I heard the announcer say that I was the first out of the water. However they must have missed a woman, as on the results someone had a time of 34:47. My time was 35:11, not my fastest time but I thought I was in the lead so felt pretty happy.

I was pretty fast in T1 probably because I thought I was 1st out of the water, everything went smoothly and I was out on the bike leg

The bike course is tough, on the first hill I was overtaken by a woman, (the eventual winner) I carried on sticking to my plan, keeping power between 156-173 watts on flats and 170-200 on the hills, I may have gone over a bit but was keeping a lid on it. After the first hill there was a long descent, which we then climbed back up on the way back. When we drove it the next day I told Patrick I didn’t think we had gone up there, but we had, its a long drag. 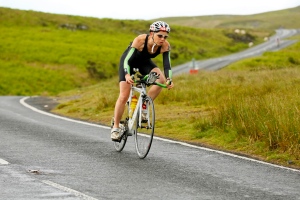 On the way out, feeling good still.

At about 25 miles or so I passed who I thought was the woman who had passed me earlier, (it wasn’t) she looked like she was slowing down quite a lot so I was feeling pretty happy at this point, feeling strong and confident. About 5 miles later my chain came off the front chainring, I back-pedalled to try and get it back on, it didn’t so I back pedalled again, it became apparent that I needed to stop to get the chain back on. I got off my bike and attempted to free the chain but it was jammed and doubled up between the chainrings. Lots of thoughts went through my head at this point, the first was that my race was over, I couldn’t fix this, I kept trying but was not getting anywhere, worried about damaging the chain, and bike. I tried to undo the quick link, but can never do that by hand and failed, so I sat at the side of the road watching bikes fly past. The woman that I had just overtook asked if I needed help and I said yes, so I waited for a marshal to come for me while more bikes shot past with people asking if I was ok. Loads of women went past. I started to wonder how long it would be before someone picked me up as I was getting a bit cold, and had a look at the bike again. This time brute force allowed me to free the chain up and get it back on. I was covered in grease and a bit weepy now, but at least I could finish the bike. I started riding and tried to get myself together. I looked down at my bottle which says “positive thoughts”, “relax” and “stick to the plan”. So that was what I tried to do. I kept chatting to people on the way telling them what had happened and was still undecided as to whether to do the run or not, as I got near the end of the bike leg I was feeling a bit negative again, and my power dropped I just wanted to see Patrick and the boys.

Coming in to T2 I took my time, I wasn’t sure whether to run or not. I spent a long time sorting stuff out and walked out then stopped for a pee

I walked out from the toilet looking for Patrick and the boys but they were nowhere to be seen, so I started running and told myself I would do 1 lap then stop. The route is flat around the lake and then up a hill and down the other side, then back over the same hill. This felt like a long slow drag, and I felt pretty crappy on the hill. I got to the feed station at the turnaround point and tried to go through the other side (I thought I had seen runners running up this bit!) I was directed back the other way, and then saw who I thought was the woman I had overtaken on the bike. She was walking up the hill, and I saw her pass a man going in the opposite direction, she was upset that she was walking, and the man said “walk then, you’re way ahead” I caught her up and asked if she had asked for help for me, she said no, and I had a brief chat with her. She was in the lead and I ran ahead of her to the end of the first lap. (she was on her second lap) I almost kept going but was worried about my knee, (I haven’t been able to run for longer that 40 mins in training without it locking up) I decided to err on the side of caution and handed my timing chip in, with a few tears.

With all races there are lessons to be learnt, things that go well, and things that don’t go as well. I have tried to focus on the positives here.

Obviously I am disappointed with not finishing but I have another race coming up that I wanted to be able to complete. The race was very tough, but well organised, the marshals were all lovely, and sympathetic especially when I handed my chip in and got a bit choked up. The weather held out for most of the time, and the views were fab on the bike course. Thanks to DB max for putting on the event, maybe I’ll try again next year!

5 thoughts on “The Titan Triathlon”