I DNF’d at this race last year so came back to give it another go. In the week leading up to the event I had just finished a block of really heavy training, and was feeling pretty tired and emotional. It didn’t help that Milo (my youngest) was playing up and that Patrick (my husband) had an infection which seems to be commonplace now, and linked to his ongoing health problems. I wasn’t sure if anyone was going to come with me to the race, but I had a good chat with Patrick on the Tuesday, and we managed to get things in perspective. If I’m honest I was hoping for a podium position in the race, as last year I calculated that, if I had finished, I would have been 2nd, but a look at the start list, confirmed, that it probably wasn’t going to happen, so I just went out to finish and do the best I could on the day.

It's been a tough week this week, kids playing up, my husband not 100%, with a race at the weekend that I Dnf'd last year. I've done a lot of thinking, probably too much! Still not feeling brilliant, mentally but slowly getting there. Things I am grateful for this week. My eldest boy helping me cook, going for a walk by the sea with my husband and talking about the big things, spending time cooking some portables to name a few. Writing these down is helping me to stay positive 🙏#swimbikerun #trimum #triathlontraining #ironmantraining #ironmanwales2016 #LTRcoaching #lovetherain #liveyourdream #lifesnotallhahaheehee

A post shared by Celia Boothman/Triathlon Coach (@lovetheraincoaching) on Jun 16, 2016 at 4:59am PDT

The race is pretty small so there was a mass start, at 7am. Once we were underway I tried to get in a small group. I couldn’t see the buoys very well (may have been due to my dark goggles, which I have started using to avoid seeing jellyfish, when I swim in Pembrokeshire!) but did my best to sight, and stick with my fellow swimmers. I felt fine on the swim I didn’t feel like I slowed down much on the second lap, but the swim splits say different!

Over on the left giving someone a hug!

Still need to work on my head position!

I wore my cycle top under my wetsuit, after my experience in Snowman, when I couldn’t get the arms past my wet elbows! so all I did in T1 was stuff some food and drink mix in my back pockets then get my race belt on. As I put my food in I ripped the race number so had to re-pin it which was a bit annoying!

I had a different strategy for the bike this year, after speaking with my coach Mark at ITT, he said I had been too conservative on the climbs last year and to push a bit more there. He outlined my power targets for each section of the course and I tried to stick to them as much as possible. I was aiming to eat every 20m and took 5 portables (rice balls etc,) and 6 gels, in a bottle, on the bike, marked so I knew when I had drunk 1 gel. I stopped at the last feed station to fill up my bottle, as I was mixing my own drink, and carried 2 bottles on the bike. There were no portaloos on the bike and towards the bottom of the “iron mountain” I was thinking about stopping to pee, but I decided to wait until T2 as there were portaloos there.

I had a low power alert set to 150W on my garmin, but I think I’m getting quite good at ignoring it now 😉 maybe I need some other plan! I was really enjoying the bike, it is a great course, but I was also quite intimidated by the last climb so I took it too easy on the flattish sections, and my memory from last year was of getting on the run and feeling terrible, (could have been a combination of disappointment, under-fuelling, and less fitness.) Anyway I finished the bike in more or less the same time as last year, if you discount the time I spent sitting at the side of the road crying in 2015.

Came in to T2 grabbed 4 gels, waved at Patrick and then saw that the portaloos were engaged. I couldn’t be bothered to wait so started running.

The run starts out flat then goes up a slow drag and down the other side to a feed station and then back up and down the same section, so you can see the competition! As I got out on the run I started overtaking, my legs were feeling a lot better than last year, but I still needed to pee and was not sure if there were portaloos on the course so I made a detour into the bushes!

I re-emerged to overtake the woman that I had just passed. When I got on the first hill I remembered it being a lot worse and got to the top thinking it wasn’t that bad, then down to the feed station I had some water and turned around, spotting a woman behind, she looked like she was running strong, and when I was coming back up the hill I heard her behind me, she stayed on my shoulder for a while, then overtook. I had her in my sights for a bit, but she was going really well, so I couldn’t catch her. I saw Patrick peeking over the fence on the 2nd lap with his camera so tried to smile, and just carried on trying to keep a consistent pace. On the final lap I felt I was slowing and I knew I wasn’t going to catch anyone or be caught so I just tried to maintain pace as best I could. As I turned for the finishing chute I spotted the clock on 5:59, so picked up my pace. I was really happy to go under 6 hours on this race, my goal was under 6h15m. 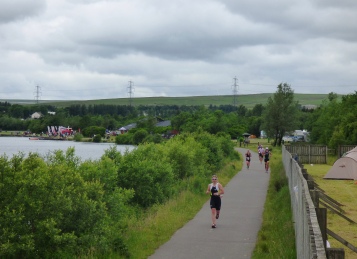 The run up to this race was pretty hard. My goal for the year is Ironman Wales, and I am aiming to qualify for Kona; however Patrick told me that he doesn’t want me to train as hard for an event next year, so I felt like there was no point in training. I also have doubts about my ability to qualify anyway, so all I can do is focus on the present moment and enjoy the process of training.

I have done a lot of thinking and there were a lot of negative thoughts flying around before the race, so I am pleased that I finished the race, and finished feeling strong. As to Ironman Wales I can only do my best and nothing more. I have a couple of weeks of easy training now, and I’m looking forward to getting my head together for the final push to see what I can do come race day. 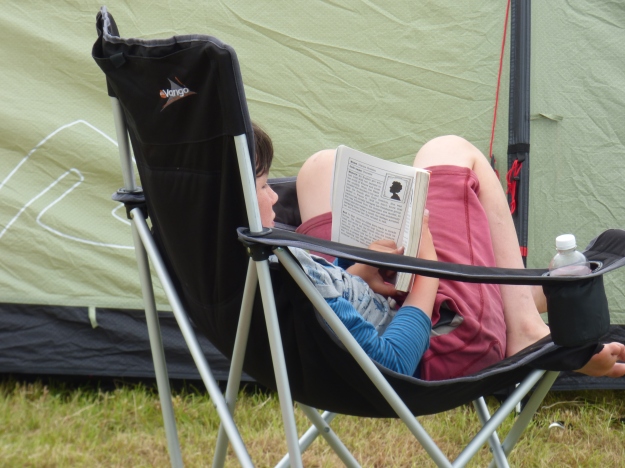