I was away staying with my dad during race week, so hadn’t really looked at the race details until late in the week. I had an email from Always Aim High events asking if I wanted to be interviewed before the race, so I looked at start times and decided it would be a good idea to book a hotel the night before! What I didn’t realise was that Ed Shearan was playing in Cardiff that night and hotel prices were a bit steep, however I found a space in a Premier Inn which wasn’t too bad and very convenient for race day, and travelled up the afternoon before with my mum so I could get registered and do my interview!

The race start was at 6:40am, I got down there in plenty of time, and there was plenty of car parking space too. The start was pretty stress free, and I had a great spot for my bike, right near the exit of transition so easy to find. I made my way down to the start and did a bit of a warm up, and chatted to Sian who was also racing. I hate pre-race nerves, but felt OK, and just wanted to get started, and test out my new tri suit.

We got in, and had a bit of a warm up, then were then told to go to the side. Everyone was wondering what was going on, and after a few minutes we were told it would be a 7am start so we got out again, and started shivering on the side. I think they took a bit longer putting the buoys out. I was a bit unenthusiastic about swimming as my swimming times have been getting slower over the course of the year, I’m not feeling the swim love at the moment, and I was swimming near a man that kept turning over and doing backstroke, which was a bit strange. I knew I was quite far behind and that there would be some fast swimmers in the field, but just got on with T1 and on to the bike.

The bike was great fun. I was really looking forward to it, as it looked technical, with laps and roundabouts, and turns. You could see the other competitors so you always had someone to chase and there was no problem with drafting as I felt I was able to pass people pretty easily, and we all had to slow down for corners etc. The first lap I just started to get into my rhythm, and then the second lap I was a bit faster, we also had the second wave athletes to chase as they got out on the course, which was a motivator. I caught up with 2 guys who were about the same pace as me on the last lap, and I let them go as we approached T2, whilst they went off for their final lap. 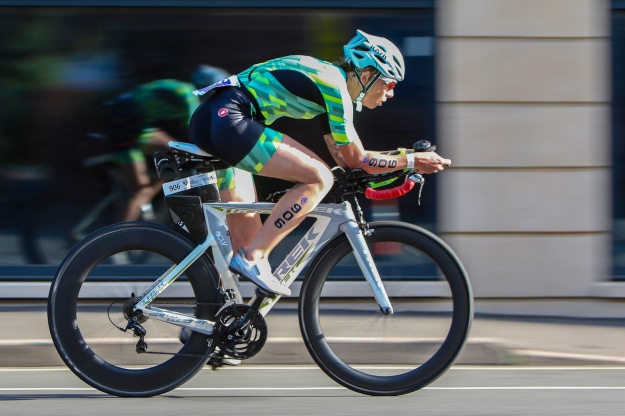 On the run, I knew there would be an opportunity to see who was ahead or behind as we ran up to the turnaround point on the barrage. I knew I would have people chasing me, and also wanted to see what position I was in. I could see the lead female, she had been in front from the start and had a camera on her, so was pretty obvious. She was also way out in front. I saw second place and 3rd and 4th, so had an idea of where I was. It looked like I would catch 4th pretty quickly, which I did, after the turnaround, and I then spotted a couple of people behind, who I knew I would have to hold off.

I carried on at my pace and on the second lap realised I was catching up with 3rd place. We were coming up to the turnaround, and I made it my goal to overtake her before the turnaround point and then hammer it home as much as I could. I was suffering a bit with stomach cramps from being pre-menstrual, but still managed to overtake and keep pushing on to the end. When I came in I thought I had just made it on to the podium, but with the race being in waves, someone in a different wave to me came in, in a faster time, so I had to settle for 4th overall and 1st F40, which wasn’t bad as I won a new pair of trainers!

I am a big fan of Always Aim High events, they are always well organised, and the staff are friendly. With so many events going on that day (olympic, sprint, super sprint and ITU qualifiers) I was really impressed with how smoothly everything went. The weather was perfect and really showed Cardiff at its best. But don’t take my word for it have a watch of the programme on S4C here