I spent most of the first day of August in Patricks hospital room in Cardiff while he recovered from surgery, with a brief excursion to the pool and Waitrose, which handily is next door to the hospital. (So glad we don’t have one near us, it would be so dangerous. I seem to have spent a lot of time this month in Waitrose one way or another!) Patricks parents came to stay for a few nights after the op, so that we could have some help with the kids. They took them out for the day on the Friday that we came home, which was really helpful as I could get things organised at home and fit in my training.

The week after, we were given another appointment for Patrick, in Cardiff, that day was the only day of training that I missed, which is testament to the support that I am getting. The day after the appointment Patrick seemed pretty low, he was uncomfortable and I really wanted to make him feel better, but there was really nothing I could do. I was feeling guilty about racing at the weekend but Patrick assured me that he wanted me to race, so he had lined up a beach BBQ with a friend, and my mum was on hand to drive, I felt like I was leaving him in safe hands.

Race report is here. I was really happy with my overall race, and its looking promising for my endurance fitness. When I got home I felt a bit rough for a couple of days but had a lot of recovery in my diary so managed to bounce back fairly fast. I packed my bike in the bike bag, that Jan has kindly lent me, to check if it would fit in the car (it did), and caught up on a few jobs that needed doing.

Now that Kona is so close, I’m beginning to think about afterwards, Patrick and I had to drive to Cardiff again for another appointment, so we had a chance to chat about next year and what our plans are. I know we both need a break from me competing at a high level. But I also need something to get excited about!

The remainder of August seemed to fly by. My training started to build again towards the end of the month, and I started dreaming about Kona! There are still some final things I need to sort out before going, and I’m planning on tackling these when the boys go back to school.

I had a great recovery day at the end of August with the family, unfortunately Milo was ill so it didn’t quite go as planned but we managed to catch the worlds most expensive mackerel on a fishing trip in Tenby! The good news is that Patrick seems to be on the mend. He still has an appointment at the end of September to check that things have gone Ok, so we’re hoping that will go well, and another appointment to discuss any cancer treatment at the beginning of September. 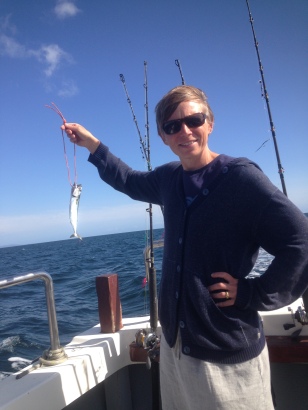 4 thoughts on “August (The road to Kona)”