The Bank Holiday weekend was our annual trip to the Dyfi Enduro. I didn’t manage to take the camera, as I had enough to worry about, but I got a few snaps. There is a good write up of the event here, and my race report is here, I took it steady and was quite pleased that I was 2nd female in the distance that I did. (I did the shorter loop) Afterwards I also noticed that my neck, shoulders and back were not so stiff as usual, must be due to the strength and conditioning work that I have included in my training this year, its amazing what a few press ups will do. However I’m feeling the effects of staying up late, camping, and off roading, so have adapted my training for the week! 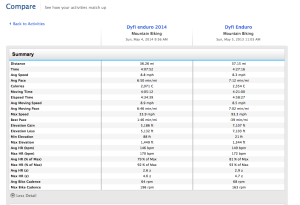 Comparison between this year and last years data

I tried to do a tempo run on Tuesday but my legs were not feeling it, so I eased off and cancelled my swim plan hoping for a better session on Wednesday. My swim on Wednesday was pretty lethargic too! 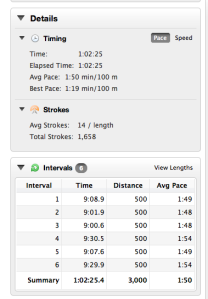 My plan is for quality workouts, so I missed my long ride and opted for a shorter turbo session with focussed intervals instead, I spent most of the morning (when I should have been on the turbo) faffing about with the computer.

I decided to do a job that I had been putting off instead and went up to get an old bikes bottom bracket removed at AWP engineering. I watched two men struggle with my seat post for about half an hour, which was quite interesting, then got home to do my turbo, finally. I’m quite looking forward to doing up the bike though, its slowly getting there! 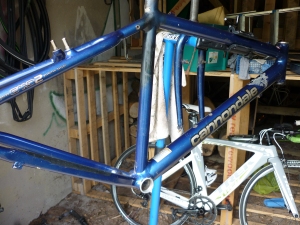 I’m very excited to have entered The Preseli Beast, well the beast bach anyway, I had a look at this race last year and thought it looked fun, but I haven’t been doing the run mileage to be able to do the long one, and I would also probably set myself up for an injury again! Will be a good run though 🙂